The following story is brought to you courtesy of PJ Media. Click the link to visit their page and see more stories.

The Army has decided to ask all applicants for enlistment a question about an association with “extremist/hate groups” in the screening process. This requirement might seem reasonable. However, according to the latest communication, extremism is defined in terms of individual belief and advocacy.

In a recent congressional hearing, Senator Tom Cotton questioned Defense Secretary Lloyd Austin regarding racially-charged exercises and training content presented during the 60-day stand-down to root out extremism. Austin disavowed the concepts that members of the military reported receiving training on. Representative Jim Banks (R-Ind.) also questioned Chief of Naval Operations Admiral Michael Gilday about placing How to Be an Anti-Racist by Ibram X. Kendi on a recommended book list for sailors. From Gilday’s answer, it is doubtful he ever read the book that some social justice warrior lackey probably placed on the list.

Yet social justice content is leaking its way into the military through some mechanism. Now, the Army Recruitment Command uses subjective and easy-to-politicize criteria to identify potential “extremists” who wish to enlist. This change comes amid the Pentagon considering ways to intensify social media scrutiny in background investigations.

On June 22, an Ops Flash instructed Army recruiters that the inclusion of a question regarding any association with “extremist/hate” organizations must be answered and uploaded for all applicants for commissioning in the Army before testing, before the physical exam, and before military entrance processing. The required form updated the gang participation question that has been asked since the 1990s: 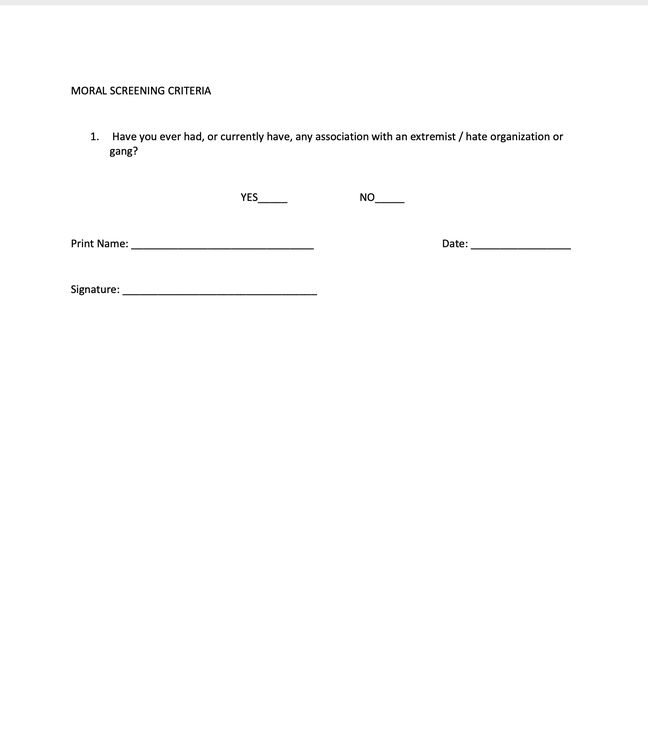 Suspecting that the definition of a gang is more commonly held than that of an “extremist/hate organization” in the current political environment, I reached out to the Army Press Desk for clarification asking three questions after reviewing the Ops Flash and new question:

I communicated that my deadline was the end of business on July 23. The press desk forwarded my request to U.S. Army Recruiting Command, cc’ing me on the email. I never received a response from the command staff, however. Despite not receiving an answer, it could be legitimate to assume that questions two and three created a flurry of activity overnight.

Wednesday morning, I received an updated communication sent to all personnel in the Army Recruiting Command. The new process is no longer an uploaded PDF form. Headquarters added two questions to the electronic screening questionnaire, and they apply to all recruits, including those for the Army National Guard and Medical Corps. In addition to asking a potential recruit if they have had associations with an “extremist/hate organization,” the questionnaire also inquires whether they have been debarred from any government facility. If the individual says yes, there are procedures to review the situation to determine suitability.

At least the new communication was complete enough to define “extremism.” It applies to an individual who advocates for any of the following:

While potential recruits are asked to respond regarding any association with a “hate or extremist group,” the definition of extremism applies to an individual’s advocacy of particular beliefs. This dichotomy appears to imply that the Army is more concerned with personal views. It is also apparent how these descriptions can screen out those with a different political ideology than the current administration.

Has an applicant ever said that biological men cannot become women, that transwomen should not be allowed to compete in women’s sports, or that medical transition of children is a bad idea? Does an applicant believe that a child is better off being raised by a mother and father? Does he or she support the recent Supreme Court decision regarding Catholic foster care agencies? Look out for number one.

If a potential recruit is an immigration hawk who advocates for border security, uses the term “illegal immigrant,” and believes that the government should deport those here illegally, is that engaging in discrimination? Again, these are legitimate policy positions that the Left views as bigoted and xenophobic, which is problematic under point number two.

These are legitimate positions in contentious policy debates nationwide, but Democrats and the Left consider them hateful, bigoted, and discriminatory. The current commander in chief has certainly made statements to this effect.

Points three and four seem a little more straightforward, as long as membership is confined to terrorist organizations designated by the government. Democrats have told us the government should not designate domestic groups like antifa and Black Lives Matter terrorist organizations despite their anarchist and communist political goals and willingness to use the threat of violence for political and judicial outcomes. Leaders of these groups bragged about influencing the Derek Chauvin verdict.

Democrats and the corporate media also tell us that looting and “peaceful protests,” like trying to burn down a federal courthouse for weeks on end, are not violence. However, saying “Make America Great Again,” wearing a red hat, and a sitting senator advocating to invoke the Insurrection Act to end months of anarchy in American cities in an editorial is all white supremacist violence.

Number five would be a no-brainer if sitting members of Congress did not stand accused of sedition and treason for questioning the results of the 2020 election. Number six could make you wonder if attending a lockdown protest, opposing school closures, or refusing to wear a mask during the pandemic qualifies as “extremism.”

The most disturbing part is that an applicant could honestly answer the question regarding associations with an “extremist/hate group.” Most people do not consider holding mainstream views on controversial policies to be hate or extremism. Yet, these positions could get an applicant disqualified from entering the military or relieved of duty after the fact under the current rigid cultural norms that seek to “cancel” anyone who violates them.

All of this is very interesting since precisely nine days ago, the Biden administration said the Defense Department did not have a definition of what extremism is. Yet, the military took a 60-day stand-down to root it out. An administration official said they were working to define it. In response to a reporter’s question, the official said:

So, as the strategy indicates, they [the Department of Defense] are relooking at a number of things, and one of those is the one you rightly flag, which is how they understand — quite literally how they define “extremism” for these purposes. They are working that quite hard, both as a policy matter with the security experts and with lawyers at the Defense Department and elsewhere, to ensure they’re doing this in a way they feel ratchets up the protections but also respects expression and association protections, again, for service members and for others.

With a critical intersectional lens being used to train and instruct all military members from West Point to the highest echelons of leadership, it is doubtful whether the Army’s definitions, when put into practice, will respect freedom of expression or association for service members.