The following story is brought to you courtesy of PJ Media. Click the link to visit their page and see more stories.

On May 7, two days before the start of “Police Week,” Wisconsin held its first memorial to fallen police officers in almost a year and a half due to COVID restrictions. The event was to add six officers’ names to the Law Enforcement Memorial of police killed while on duty. There are now 285 names on the Wisconsin Law Enforcement Memorial in Capitol Square, located in Madison, Wisconsin.

What was intended to be a solemn day of remembrance turned ugly, fast. Eight minutes into the ceremony a group of BLM ghouls decided they had a “right to protest.” The loudest of them bellowed, “This is a megaphone. By the way, this is a megaphone, not a gun.” There were shouts of “Black Lives Matter!” Another can be heard yelling, “Why wasn’t the black national anthem played?”

After a little tit-for-tat with an unseen individual, the megaphone man goes off on a rant: “You’ve got tears coming out of my eyes. You know why? Because I have faith in people, and you’re totally disrupting my f***ing balance right now.” He then went on to say he was “begging you m*********ers to stop killing people that look like me.”

No mention of whether or not he agreed that black (and all other) criminals are infinitely more likely to survive encounters with police when they don’t resist arrest. No one knows if any of the other fallen officers even discharged their weapons at black people during their law enforcement careers. One officer died on duty as long ago as 1933 and another in 1945.

A pastor was booed after saying a prayer. Someone yelled “Murderers!”

The vile icing on this BLM cake came during the moment of silence for the fallen officers when BLM blared a rap song with the lyrics, “F*** the police.”

This is the type of disrespect we can expect when our now-VP Kamala Harris tells sexual assault suspect/arrest resister (who had a knife in the car he was returning to) Jacob Blake that she is “proud” of him. Blake was paralyzed from the waist down after getting shot by a police officer in Kenosha, Wisc., after a call to 911 reporting that he allegedly sexually assaulted his ex-girlfriend.

As nasty as this display was, it’s not the worst sign of disrespect toward cops. Seventy-one Chicago police officers were shot or shot at between November 30, 2020, and January 14, 2021 — a massive increase from previous time periods.

BLM has violently crashed Back the Blue rallies around the United States, including Long Island, Denver, and Bay Ridge, N.Y.

The officers remembered and added to the Wisconsin memorial are: 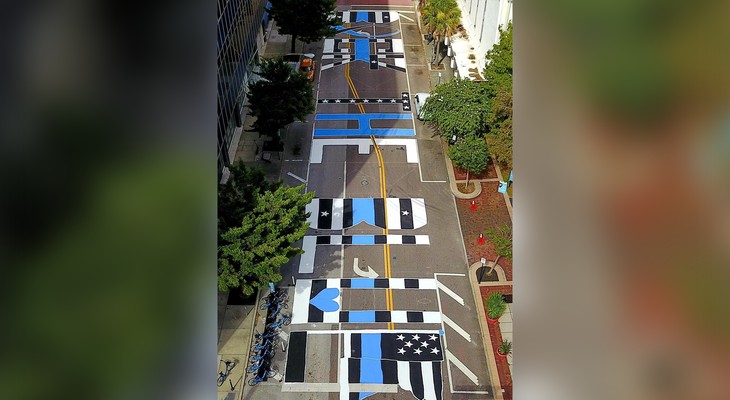